Lancet Article: National, regional, and worldwide estimates of preterm birth rates in the year 2010 with time trends since 1990 for selected countries: a systematic analysis and implications

Preterm birth is the second largest direct cause of child deaths in children younger than 5 years. Yet, data regarding preterm birth (<37 completed weeks of gestation) are not routinely collected by UN agencies, and no systematic country estimates nor time trend analyses have been done. We report worldwide, regional, and national estimates of preterm birth rates for 184 countries in 2010 with time trends for selected countries, and provide a quantitative assessment of the uncertainty surrounding these estimates.

Born too soon: the global action report on preterm birth 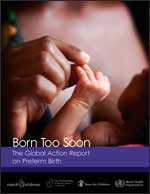 Born too soon: the global action report on preterm birth

provides the first-ever national, regional and global estimates of preterm birth. The report shows the extent to which preterm birth is on the rise in most countries, and is now the second leading cause of death globally for children under five, after pneumonia.

Addressing preterm birth is now an urgent priority for reaching Millennium Development Goal 4, calling for the reduction of child deaths by two-thirds by 2015. This report shows that rapid change is possible and identifies priority actions for everyone.

This inspiring report is a joint effort of almost 50 international, regional and national organizations, led by the March of Dimes, The Partnership for Maternal, Newborn & Child Health, Save the Children and the World Health Organization in support of the Every Woman Every Child effort, led by UN Secretary-General Ban Ki-moon.

Born too soon proposes actions for policy, programs and research by all partners – from governments to NGOs to the business community -- that if acted upon, will substantially reduce the toll of preterm birth, especially in high-burden countries.

The report contains a foreword by UN Secretary-General Ban Ki-moon and is accompanied by more than 30 new and expanded commitments to prevention and care of preterm birth, joining more than 200 existing commitments on everywomaneverychild.org.

Except where otherwise noted, some rights reserved under Creative Commons Attribution-NonCommercial-NoDerivatives 4.0 International License.